Our Diligent Souls animates the term relationship through its collective of committed friends, through their respective workmates and families. In Dublin’s inner city, these self-determined protégés tackle ongoing challenges, maturing through sacrifice and adversity, supporting each other as circumstance shifts. In an Irish manner that playfully pulsates, they create a sense of fusion with as many diversions as they can find. The dynamic of critical choice forcing them to re-balance their ideas of work and play while they thirst for social inclusion. 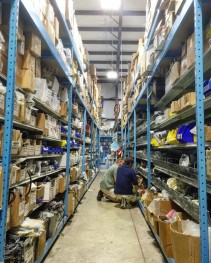 Our Diligent Souls unearths elusive commonalities in this gritty but frank showcase of the Irish experience. Mark is a floor manager and the perpetual undertaker of false practice, clashing at the inbreed bottleneck of corporate incompetence. Emily is the soul-survivor of an eccentric family tradition, a talented, vibrant young woman who ignites Mark’s deeply held notion of love. 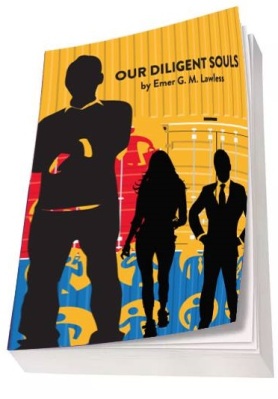 Elliot and Siobhan are the Dublin hosts that stitch together this tapestry of like-minded souls. Oden, Elliot’s younger brother, is the special needs child that Irish teachers rally round and elevate to the position of inter-classroom messenger; a lad with ADHD and mild Asperger’s syndrome who by then is a degree student in games development, a soon-to-be professional coder regardless of his above conditions. Brian and Alfie are Australian emigrants, Mark’s childhood companions from a border town that was shaped by the sacrifices of an Irish civil war.

Our Diligent Souls sticks its nose into the business of corporate chains to celebrate tax-free opportunities, exploring the affirmative duties of those connected with industry. Marvelling at the humour and diversity of a nation that grapples to exemplify the down-trodden, rejecting the necessity of army and war as a fundamental right, love like civil defence abounds in its many forms. The sulfur tip of two matchsticks igniting in union, the pain, the personal relevance, and the great white lies that illustrates base desires, conviction and concern. The shelter of the family is required, the subterfuge of a sociopathic management official in a world where a population falls and somehow rises to reinstate its course of action, time memorial. Breathe easy as there are raucous highlights, a team of devoted idealists shooting blanks at the notion of a heyday.

Purchase on Amazon Our Diligent Souls paperback and on Kindle here

Emer Geraldine Majella Lawless was born in the border town of Dundalk in 1969. In her teens, she wrote a number of plays that were staged in the Dundalk Town Hall and went on to work as writer in residence to a local theatre company, and the Patrick Kavanagh Centre in neighbouring Inniskeen. Emer travelled continuously for seven years before moving to Dublin, starting out in New York, she explored most of Europe before living in India for a year. During Thatcher’s reign, she moved from country to country in a converted ambulance before becoming the mother of an exceptionally gifted young man with Adhd and Aspergers. 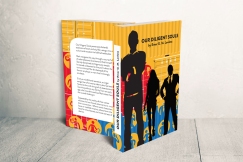 Having befriended a collective of first and second generation hippies, she went on to live in Dublin for six years. During which time she worked in Gill’s on the north circular road, the pub where Breandan Behan held his wedding reception and associated with the likes of Kavanagh, Casey and Joyce.

Emer worked as woman’s officer for the James Larkin centre, and writer in residence to Stoneybatter’s Stoneleaf project, the first community arts gallery in Ireland. After which, she went on to work with special needs children through the Art Squad, in Clondalkin. Returning to Dundalk she opened a mosaic art studio, teaching mosaic in the schools, woman’s aid communities and traveller’s associations in Louth. She is presently engaged in writing short stories as a mental health advocate. Emer completed a degree in business management via Dkit, and outside of the publication of Our Diligent Soul, she also publishing a collection of lyrical poetry called Love, Honour & Negotiate.